tomorrow is the last day of term, and I think we are all really looking forward to the holidays! I thought I would make bags for the teachers (an idea blatantly stolen from my friend Julia aka weirdbunny) as our end of year present, They turned out pretty cool, i think (now I want to keep one) and each contains a yummy box of maltesers - couldnt let them go without chocolate could I? 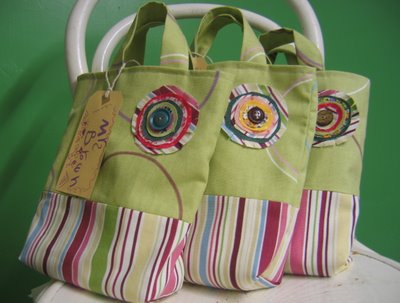 They were pretty quick to make, I chose fabric and cut them out yesterday night and sewed them up tonight. It would have been quicker, but I cut some other fabrics first then decided I didnt like them so much, they looked too wintery or something, I might still make up the other bags another time.

The 'flower' button trims I added were vaguely based on a memory I had of one of Mollychickens tutorials, but mine are a much simpler (lazier) version with much less sewing when I looked them up!! 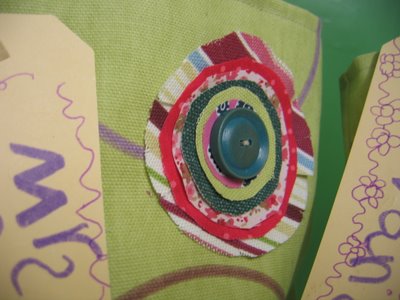 Here they are again so you can see the fantastic tags Esme drew for them. Cariad Esme is welsh for love from Esme. 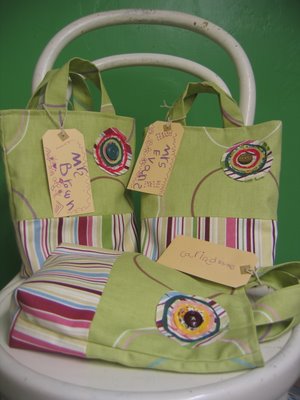 And altogether they only cost me 97p, for the chocolate, as I already had the fabric.

oh, and I had to buy some cotton thread as I ran out, but that was 35p from the corner shop.

it worked like 35p thread too - note to self - buy decent thread next time and then it wont break about every 5 stitches.
Posted by hannah at 11:58 pm

Oh Hannah those bags are lovely so much better than mine!!!

And the fabric... where did you get it? I struggle to find fabric that is not too 'twee', if you know what I mean...

Do you have a pattern for the bag? did you line them?

You clever girl! I love them.

They are so wonderful...

and I missed it, did you use a pattern?

Those bags turned out wonderful! I love the circle feature in juxtaposition with the stripes. Oh, I love stripes!