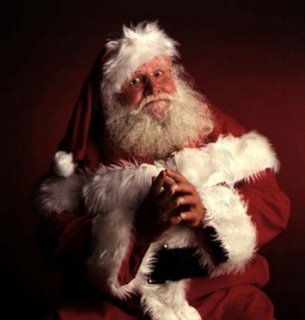 hang on a minute, isnt it still august???? today I went into town, and Woolies (one of our biggish stores) has started getting christmas stuff in!!

whats going on? I havent even finished my holidaying, my kids aren't back at school, the sun is out allbeit with a slight drizzle of rain, how can I possibly be thinking about christmas already? I mean, I like christmas and all that, but theres a time and a place....

anyway, I just stumbled across this so its not just Woolies who are at it. If you want even more christmas, all year round it seems, you can go here.

Im not starting yet though, lets get the summer done with first shall we?
Posted by hannah at 11:47 pm 9 comments: 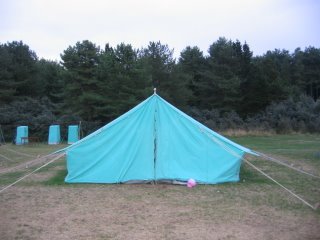 as the title suggests, here I am, back from camp. we had a great week, and I think the teenagers did too.

The pic is of our tent, taken at dusk on the last night when I suddenly thought hmm should take a pic!! look at the lurvely toilet tents in the background. It is a small christian camp, with about 40 people in all - not all in our one tent though, it would be awfully squashed, of course there are many more tents just out of shot. me and Andrew are joint leaders along with a couple of other people, although I really dont do much except look after my children and run the couple of craft workshops, and just be around. Andrew does more, so I try not to feel too guilty about my time in the park or on the beach or just hanging about.

actually, I did spend a whole afternoon this year sitting outside a visitors centre on a small mound of grass covered in rabbit poo with 3 children under 5 ( I really hope youngest didnt eat any of that poo), no money (had thought I had my purse, but had taken it out of my bag earlier in the day), opposite an ice cream van (torture), no phone and nothing to do except wait around for groups of teens to briefly visit as part of a living cluedo game. so, fair dues, I suffered my part!

the craft workshops went well, shrinky dink was touch and go for a while when I discovered the camp oven had for temperature control a handwritten 'high' and 'low' at either side of the control knob, and the first batch to go in screwed up into tiny scrumpled balls eekk.

I chanced it that it was too cool, beefed up the heat, left the scrumpled shrinks in, and eventually they flattened out and all the next lot worked fine. phew, catastrophe averted.

I did forget to take pliers though, so my teeth and nails had to attach and open/close all those jump rings ouch!! amazingly I didnt chip my teeth, though my nails got torn a few times.

The other craft we did was mirrors. using a bathroom tile as a base, with a layer of grout on top, a mirror tile in the middle, and various shells, pebbles, marbles and beads to decorate. simple as and seemed to go down pretty well too. some people made more shrinky dinks as well.

so, now we are home and washing every clothing item in sight, a permanent line full of washing, and later in the week we are off again on another jaunt.
Posted by hannah at 11:00 pm 3 comments: 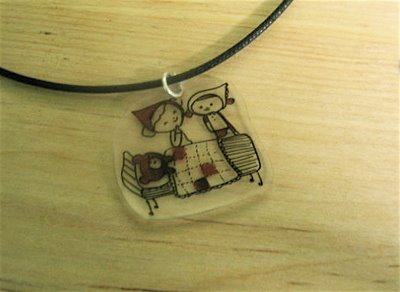 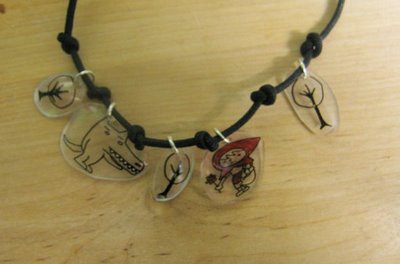 please excuse the bad photos but it is 3am.

So, look what fun I have been havng with shrinky dink. I made a red riding hood bracelet and a bear/girls necklace. aren't they sweet, I found the images in some of my japanese craft books and just transferred them onto the shrinky dink, cooked them, and put them on 'leather' thongs.

I am supposed to be packing, we are going camping tomorrow (today!!!) in the morning anyhow, but I got distracted. There was a purpose to the beginning of the crafting, as I am to be doing a few workshops with the young people we are taking camping, and I wanted to remind myself how small shrinky dink shrinks for when we make pendants etc. I couldnt remember as all I have made recently is pins and they go very small!

So, I am very pleased with my results, ok, they could have been flatter, but I wasn't quick enough with the bread board on top as I pulled them out of the oven!! I am also going to have to find my pliers, as its gonna break my teeth fixing all those little metal rings on otherwise!!

Anyhow, must go and finish throwing things at my suitcase, did I mention its 3 am? and maybe (who knows) go get some sleep. 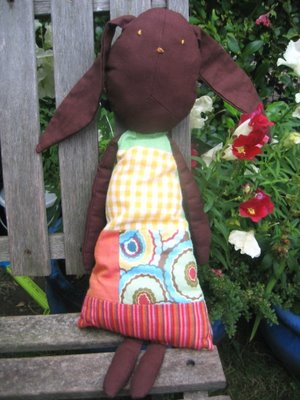 Meet loopy bun, I dont think you have been formally (or informally, most of you for that matter) introduced. she lives in the toybox, or often on the floor (come on, let your kids play with your softies!!) and sometimes sneaks out into the garden (eek!!).

I can't believe I have forgotten to show her here before now, as I made her back in the spring. I only realised today that I had no photos of her (until today).

I was chatting to Julia about blogging and life in general, and she told me about this site. when I went I remembered I had been there before, its a great site.

so, I was browsing through to see if there were any books/projects I had. I saw this book, remembered loopy bun, and was about to add a pic to the flickr tags, but... no pics, no computer record of her at all! I made her in spring colours, she is lightly stuffed so she is pretty floppy and has no buttons so Lucie can play with her safely. After I made her I altered the pattern (quite a lot) and made this bunny with a similar dress.

I really like the book and want to make more from it too.

here is another pic, we were trying to recreate the front cover! 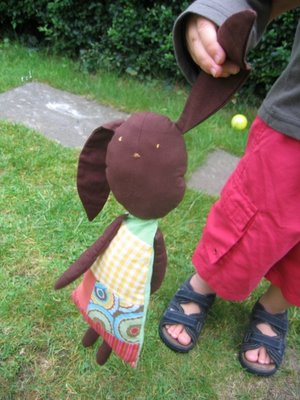 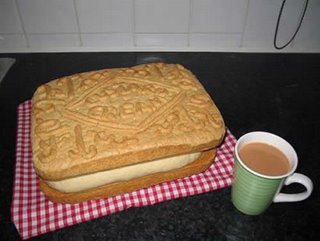 oh my goodness just look at these!! 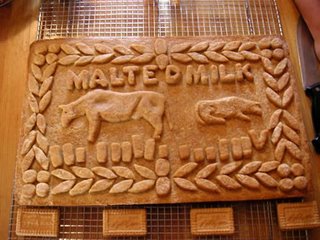 I was just browsing some blogs, and on Yarnstorm's blog came across pimp that snack which you must check out,

so, so funny and inspiring. here are a couple more (I like the biscuits best!) 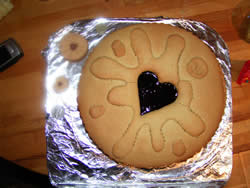 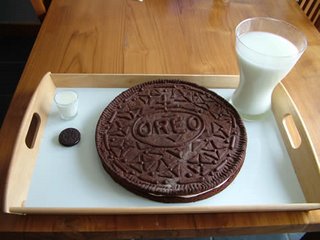 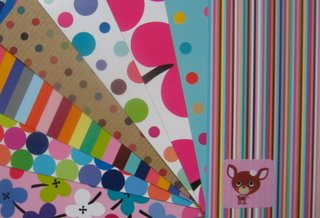 because music is heard and not seen, here are some postcards I bought recently from paperchase for 10p each.

now, what I really wanted to tell you about is a great kids podcast called spare the rock, spoil the child that I discovered recently after much trawling through the Itunes lists. It is intended as kids music 'based on the radical notion that music for kids shouldn't make parents want to gouge out their ears'. as we have been driving about from place to place this summer and on the train we have been listening to this and it is great. go and listen and subscribe to the podcasts, a new one comes out weekly. They play they might be giants every show (remember little birdhouse in your soul???) who have now done kids cds not available in the UK though except on import, and lots of other cool stuff besides.

there are also some cool links on the site worth visiting too, my faves are I think small ages and the lovely Mrs Davis, both offer more insights into music for kids that is ok for parents to listen to too.

today is my 100th post, so first one to leave me a lovely message will get a parcel of yummy UK candy and chocolate!
Posted by hannah at 8:21 pm 11 comments: 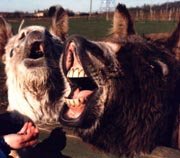 Just got back from a weekend staying with my parents, we went to Over farm yesterday, it is where they took the children fruit picking a fortnight ago, although the fruit picking season is done now. There are animals there to see, and it is free!! We did not see the donkeys doing this while we were there though. It is a cool place, there are pot bellied pigs and gloucester old spot, goats, ponies, chickens (lots) an Ostrich and a big bull/buffalo thing. There is also a living pizza, a field divided first into a circle then into segments, with different crops in each section showing all the different bits of a pizza growing, wheat for flour, onions, sweetcorn, herbs etc. 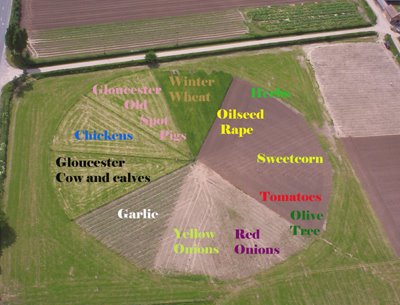 the donkeys were in the pizza field too yesterday but I have never had donkey pizza and hope they were just visiting. We had a picnic and bought lots of fresh produce from the shop, yum.
Posted by hannah at 11:35 pm 1 comment: 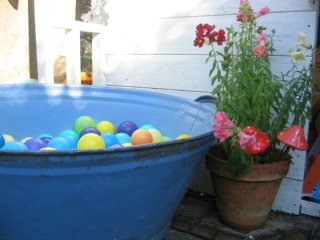 This is my pic for the colour of the week, sky blue. It is an old tin bath that I found up in the back garden of my old house when we first moved it there, I say 'up' as the garden was very steep, a mountain really! I loved the bath so much that I painted it sky blue with spray paint, as you can see it could do with a new coat of paint. We normally have sand in it but the kids have spread the sand all over the lawn so for now it has balls. And my flowers could do with a water, it is too hot for them, poor things.
Posted by hannah at 11:05 pm 2 comments:

so, it was dusk and we were watching James Bond on tv, when I glance out of the window to see this crazy light that made me run outside. 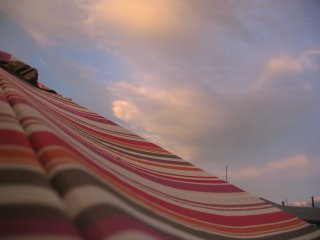 It made all the oranges and pinks and reds in the garden just leap out, I tried to capture some in the five minutes it lasted, then it was gone. 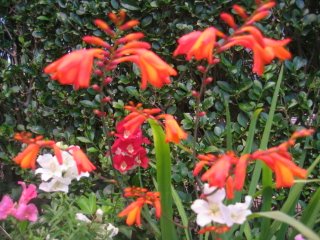 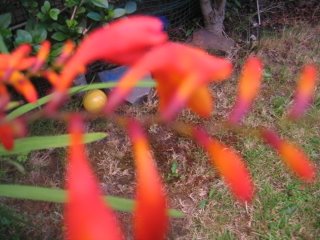 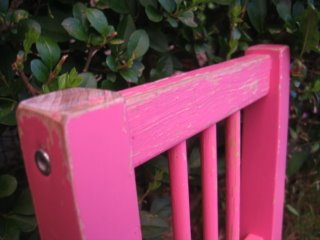 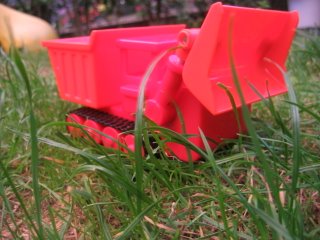 feels sort of stormy, maybe I should bring in the washing...
Posted by hannah at 10:31 pm 5 comments: 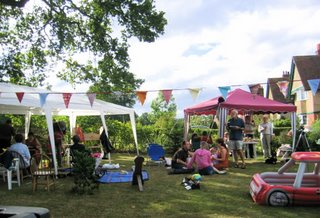 now that blogger has calmed down and stopped having tantrums. a few photos from the weekend. you could also go and visit migs blog (lovely host of the party) and her daughter frans blog, we realised over the weekend that several of us kept blogs and there was a freaky little while at the party where many of our blogs were checked out. so, visit theirs, and please continue and read mine, but not right in front of me, as it is a little alarming. (I am looking away now, you can carry on...)

anyway, the pics, above is a general scene from the weekend, in fact it looks pretty quiet here, there must be a few people playing Aunt Sally. 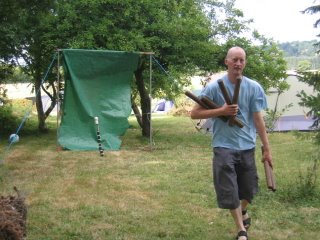 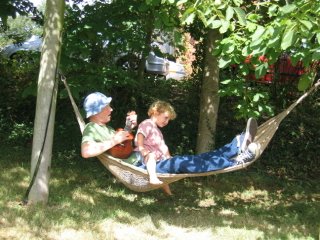 of course I dont have so much to say now, most of my decentish pics have gone to flickr already.

we camped for the weekend, as I think I mentioned before. I loved how our tent was under a walnut tree.

as a child I used to go with my mum and my brother and pick walnuts from the trees in the fields across from our house. our old walnut trees were all together, but it was always a bit exciting and scary as they were in the same field as the witches house. not that it was a real witches house, of course, just an empty deserted ramshackle place. but it was odd, all alone in that field, and there were many stories attached to the house and the brook that ran alongside. we used to enjoy picking the walnuts, I remember peeling back the skins, like smooth conkers, to reveal the nut inside, all soft and green in its shell, It stained your fingers and peeling too many made them sore but the nuts were so yummy and fresh and crunchy and we loved them.

so, here are some from the weekend, not ready for picking yet, still green. 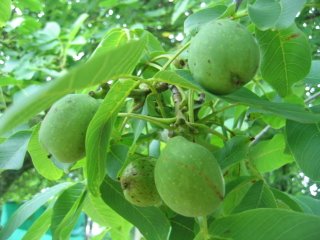