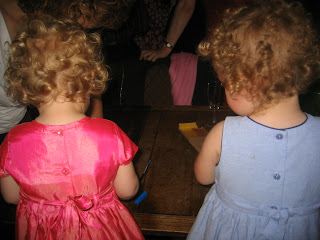 Lucie and her cousin Ana had a great time at the wedding party on Saturday, as we all did. This photo should have been much better than it is, but the girls wouldnt go closer together unless I had pushed them, and we were in a dark corner, and Im just not very good! You can see their matching curls though. There was yummy food, lots of wine, and we didn't get home until 1.30 in the morning.

So, bearing in mind that on Saturday we drove to London and back in the day (more than 3 hours travelling each way), whats the best thing we could have planned for Sunday?? A birthday party in our little house - yay!

It was only a few of Lauries closest friends though, and the weather was lovely so they all just played in the garden, someone bought him water pistols, two people I think, so there was a big waterfight at one point. I will show you his cake as I have hardly any other photos, but dont judge me, its a bit of a butter icing monstrousity, as I didnt get round to getting rolly-out icing, and secretly I like this stuff more anyway tastewise!! It is number 4 from the Numberjacks, for those unaquainted with British kids telly (oh if only!) 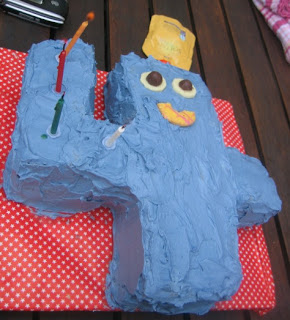 The sun cream tube at the top is not a part of the cake, just an indication of the heat of the day and another unprepared snap photo. Oh, and the candles are angel candles, lit but invisible in this photo, they have different colour flames, but dont really work outside, as you can see!
Posted by hannah at 9:55 pm

That's so weird, I thought the curls came from you, not your husbands side of the family !

What a lovely BIG BLUE cake :)

Love the girl's curls in that photo. And that's a great blue for a cake. Laurie was a lucky boy.

Cute little girls. Thanks for stopping by my blog and leaving a comment. Hope to hear from you again.

Gorgeous curls! Well done for making the birthday cake! Our daughter had to make do with a shop bought chocolate creation with extra sweets added. I did make some of her presents though. Did the blue icing taste good? Lucy