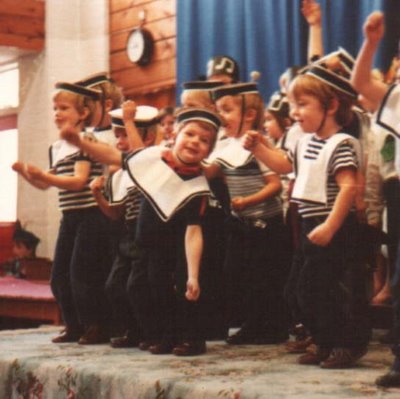 There he is, the one in the middle (nice actions). Dont you just love school plays for great photos? Tomorrow he is getting married to Jenny so I thought I had better give you an introduction rather than just springing wedding pics on you all.

So, my (big) little bruv, he is 4 years younger than me and I remember as a child him coming on the scene and generally getting in my way. He was always the golden boy too, I was a pretty naughty child and he always did as he was told. I made it my job to make his life more difficult (and painful where possible), preferably without getting caught. Only recently I confessed to my parents that, when the boy fell down the stairs as a 1 year old, he didn't fall as they had always believed, he was pushed. And that was not a stand alone incident, and thats all I am saying.

Obviously now we are adults my "I want to get rid of you' feelings have turned into a much more amicable relationship, although we dont see each other very often or keep in contact as much as we should. I think we get on pretty well now though, all things considered. He may not be too impressed when he sees that photograph live on the internet, but it could have been much worse. I did consider several others, involving pottys, naked tea in the garden with cousins (this was my first thought, but then I decided cousins might also object), you can imagine I'm sure.

Hoping for sunshine in the morning and a great day for them both.
Posted by hannah at 11:58 pm

Well you will probably be at the wedding right now! Hope it is a lovely day for all and Andrew & Jenny have a blessed life together :)

Congrats to your brother and his new bride! Love that school picture too. He looks like a real ham!

It's so weird you have brothers Hannah, I always imagine you being an only child. Hope you enjoy the wedding, pictures of your outfit are a must, and of course what the bride is wearing.

Funnily enough I have been blogging about brothers too. You've met mine.

Funny how I also have a similar story about pushing my brother(with plenty of hate) but everybody thinking he just fell. He split open his lip and had 5 stitches. Well, you have to do something when you have a handsome brother and you are the ugly one. I hope you all had a lovely day at the wedding. Pass my congratulations to the happy couple.

So do you have a shiny sink then? I do flylady too, it makes me laugh but it does seem to help.

I love the school photo and the confession. My sister and I had moments like that too.

Thanks for your reassurance on schools, it's nice to hear from someone in the same situation. I had a few lessons before so I really must take it up again, I find it hard though.